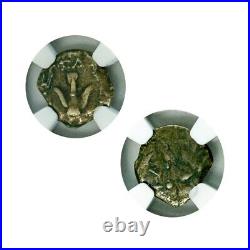 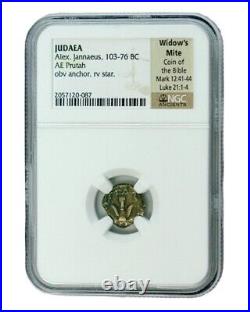 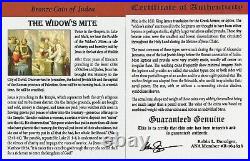 Widows Mite Ancient Coin NGC Certified Premium Grade Judean Prutah (103-76 BC). The Widow's Mite 2000 year old coin. The Famous Widow's Mite, Judean bronze lepton of King Janeaus, minted ca. Mentioned in New Testament books, Mark and Luke, in the famous parable about a poor widow praised by Jesus for her charitable contribution of two mites... Coin comes in plastic slab certified as authentic from NGC. They are hand struck and crudely made. Often the image will be off center.

This adds to the historical interest of the piece! Twice in the Gospels, in Luke and Mark, we hear the Parable of the Widow's Mites-a tale of charity and humility told by Jesus in the last days of His life. After three years of itinerant preaching in the lesser cities of Galilee and Judea, Jesus has brought His Ministry to the City of David.

Once arrived in Jerusalem, the hub of Jewish life and the capital of the Roman province of Palestine, there will be no turning back. In a week's time, He will be crucified. Jesus is preaching in the Temple, which represents both the city's religious center and its business district. Jesus watches rich men in flowing gowns put pieces of silver into the treasury-generous offerings to the Temple. Then he watches a woman, a certain widow, deposit two "mites" into the till.

He observes that this poor widow has put in more than all those who have given to the treasury; for they all put in out of their abundance, but she out of her poverty put in all that she had, her whole livelihood. The parable, repeated in Luke 21:1-4, is understood to both extol the virtues of charity and impugn the vices of avarice. As Jesus remarks in Matthew 19:24, it is easier for a camel to go through the eye of a needle than for a rich man to enter the kingdom of God.

Mite is the 1611 King James translation for the Greek? The "widow's mites" mentioned in the Scriptures are thought to have be either leptons or perhaps similar, slightly larger variations called prutahs.

These tiny bronze coins were the smallest and lowest denominations that circulated throughout the Holy Land during the lifetime of Jesus Christ. The most common of these types were struck during the reign of Alexander Jannaeus, one of the last Jewish kings before the Roman annexation of Judaea. Most leptons and prutahs were very crudely made, usually off center on irregular flans.