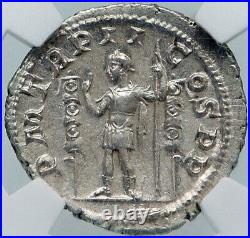 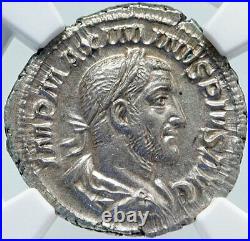 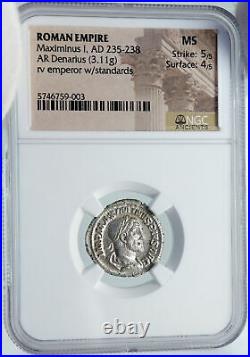 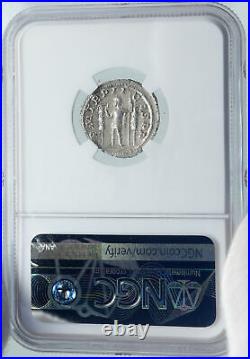 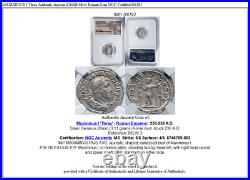 Gaius Iulius Verus Maximinus c. 173-238, also known as Maximinus Thrax i. Maximinus the Thracian and Maximinus I, was Roman Emperor from 235 to 238. Maximinus is described by several ancient sources (none of which, except for Herodian's Roman History, was actually contemporary with Maximinus) as the first barbarian who wore the imperial purple and the first emperor never to set foot in Rome.

He was the first of the so-called barracks emperors of the 3rd century; his rule is often considered to mark the beginning of the Crisis of the Third Century. According to the notoriously unreliable Historia Augusta (Augustan History), Maximinus was born in Thrace or Moesia to a Gothic father and an Alanic mother; however, the supposed parentage is highly unlikely, as the presence of the Goths in the Danubian area is first attested after the beginning of the Crisis of the Third Century. Sir Ronald Syme, writing that "the word'Gothia' should have sufficed for condemnation" of the passage in the Augustan History, felt that the burden of evidence from Herodian, Syncellus and elsewhere pointed to Maximinus having been born in Moesia. Most likely he was of Thraco-Roman origin (believed so by Herodian in his writings), and the references to his "Gothic" ancestry might refer to a Thracian Getae origin (the two populations were often confused by later writers, most notably by Jordanes in his Getica), as suggested by the paragraphs describing how "he was singularly beloved by the Getae, moreover, as if he were one of themselves" and how he spoke "almost pure Thracian". His background was, in any case, that of a provincial of low birth, and Maximinus, similarly to later Thraco-Roman Roman emperors of the 3rd-5th century Licinius, Galerius, Aureolus, Leo the Thracian, etc. , would elevate himself, via a military career, from the condition of a common soldier in one of the Roman legions to the foremost positions of political power. He joined the army during the reign of Septimius Severus, but did not rise to a powerful position until promoted by Alexander Severus. Maximinus was in command of the recruits from Pannonia, who were angered by Alexander's payments to the Alemanni and his avoidance of war. The troops, among whom included the Legio XXII Primigenia, elected the stern Maximinus, killing young Alexander and his mother at Moguntiacum, also a site where many Christians were martyred (Mainz) in 235. The Praetorian Guard acclaimed him emperor, and their choice was grudgingly confirmed by the Senate, who were displeased to have a peasant as emperor. His son Maximus became caesar. According to British historian Edward Gibbon.

[H]e was conscious that his mean and barbarian origin, his savage appearance, and his total ignorance of the arts and institutions of civil life, formed a very unfavourable contrast with the amiable manners of the unhappy Alexander. He remembered that, in his humbler fortune, he had often waited before the doors of the haughty nobles of Rome, and had been denied admittance by the insolence of their slaves.

He recollected too the friendship of a few who had relieved his poverty, and assisted his rising hopes. But those who had spurned, and those who had protected, the Thracian, were guilty of the same crime, the knowledge of his original obscurity. For this crime many were put to death; and by the execution of several of his benefactors Maximin published, in characters of blood, the indelible history of his baseness and ingratitude.

Maximinus hated the nobility and was ruthless towards those he suspected of plotting against him. He began by eliminating the close advisors of Alexander. His suspicions may have been justified; two plots against Maximinus were foiled.

The first was during a campaign across the Rhine, during which a group of officers, supported by influential senators, plotted the destruction of a bridge across the river, then leave Maximinus stranded on the other side. Afterwards they planned to elect senator Magnus emperor; however the plot was discovered and the conspirators executed. The second plot involved Mesopotamian archers who were loyal to Alexander. They planned to elevate Quartinus, but their leader Macedo changed sides and murdered Quartinus instead, although this was not enough to save his own life. The Crisis of the Third Century (also known as the "Military Anarchy" or the "Imperial Crisis") is a commonly applied name for the crumbling and near collapse of the Roman Empire between 235 and 284 caused by three simultaneous crises: external invasion, internal civil war, and economic collapse. Maximinus' first campaign was against the Alamanni, whom Maximinus defeated despite heavy Roman casualties in a swamp near what is today Baden-Württemberg.

After the victory, Maximinus took the title Germanicus Maximus, raised his son Maximus to the rank of Caesar and Prince of Youths, and deified his late wife Paulina. Securing the German frontier, at least for a while, Maximinus then set up a winter encampment at Sirmium in Pannonia, and from that supply base fought the Dacians and the Sarmatians during the winter of 235-236. Gordian I and Gordian II. Early in 238, in the province of Africa, a treasury official's extortions through false judgments in corrupt courts against some local landowners ignited a full-scale revolt in the province.

The landowners armed their clients and their agricultural workers and entered Thysdrus (modern El Djem), where they murdered the offending official and his bodyguards and proclaimed the aged governor of the province, Marcus Antonius Gordianus Sempronianus (Gordian I), and his son, Gordian II, as co-emperors. The senate in Rome switched allegiance, gave both Gordian and Gordian II the title of Augustus, and set about rousing the provinces in support of the pair. Maximinus immediately assembled his army and advanced on Rome, the Pannonian legions leading the way. Meanwhile, in Africa, the revolt had not gone as planned. The province of Africa was bordered on the west by the province of Numidia, whose governor, Capellianus, nursed a long-standing grudge against the Gordians and controlled the only legionary unit (III Augusta) in the area.

He marched on Carthage and easily overwhelmed the local militias defending the city. Gordian II was killed in the fighting and, on hearing this, Gordian I hanged himself with his belt. Pupienus, Balbinus, and Gordian III. When the African revolt collapsed, the senate found itself in great jeopardy. Having shown clear support for the Gordians, they could expect no clemency from Maximinus when he reached Rome. In this predicament, they determined to defy Maximinus and elected two of their number, Pupienus and Balbinus, as co-emperors. When the Roman mob heard that the Senate had selected two men from the Patrician class, men whom the ordinary people held in no great regard, they protested, showering the imperial cortège with sticks and stones. A faction in Rome preferred Gordian's grandson (Gordian III), and there was severe street fighting. The co-emperors had no option but to compromise, and, sending for the grandson of the elder Gordian they appointed him Caesar. Maximinus marched on Rome, but at Aquileia Maximinus's troops, suffering from famine and disease, bogged down in an unexpected siege of the city, which had closed its gates when they approached, became disaffected. In April 238 the Praetorian guards in his camp assassinated him, his son and his chief ministers. Their heads were cut off, placed on poles, and carried to Rome by cavalrymen. Pupienus and Balbinus then became undisputed co-emperors.

Maximinus reversed Alexander's policy of clemency towards the Christians, who were viewed as unsupportive enemies of the state. He persecuted Christians ruthlessly, and the bishop of Rome, Pontian, as well as his successor, Anterus, are said to have been martyred. Ancient sources, ranging from the notoriously unreliable Historia Augusta to Herodian, speak of Maximinus as a man of significantly greater size than his contemporaries. He is, moreover, depicted in ancient imagery as man with a prominent brow, nose, and jaw; symptoms of one form of overgrowth.

While the exact size of Maximinus will probably never be known, he was nonetheless likely a man of great size. According to Historia Augusta, "he was of such size, so Cordus reports, that men said he was eight foot, six inches in height".

It is likely however that this is one of the many'tall tales' in the Historia Augusta, and is immediately suspect due to its citation of'Cordus', one of the several fictitious authorities the work cites. Although not going into the supposedly detailed portions of Historia Augusta, chronicler Herodian, a contemporary of Maximinus, mentions him as a man of greater size, noting that: He was in any case a man of such frightening appearance and colossal size that there is no obvious comparison to be drawn with any of the best-trained Greek athletes or warrior elite of the barbarians. Some historians interpret the stories on Maximinus' unusual height (as well as other information on his appearance, like excessive sweating and superhuman strength) as popular stereotyped attributes which do no more than intentionally turn him into a stylized embodiment of the barbarian bandit or emphasize the admiration and aversion that the image of the soldier invoked to the civilian population.

His consistent portrayal as a man with a prominent brow, nose, and jaw, made some researchers to suspect that he may have suffered from overgrowth to some extent in form of acromegaly. World-renowned expert numismatist, enthusiast, author and dealer in authentic ancient Greek, ancient Roman, ancient Byzantine, world coins & more. Ilya Zlobin is an independent individual who has a passion for coin collecting, research and understanding the importance of the historical context and significance all coins and objects represent. Send me a message about this and I can update your invoice should you want this method. Getting your order to you, quickly and securely is a top priority and is taken seriously here. Great care is taken in packaging and mailing every item securely and quickly. What is a certificate of authenticity and what guarantees do you give that the item is authentic? You will be very happy with what you get with the COA; a professional presentation of the coin, with all of the relevant information and a picture of the coin you saw in the listing. Additionally, the coin is inside it's own protective coin flip (holder), with a 2x2 inch description of the coin matching the individual number on the COA.

Whether your goal is to collect or give the item as a gift, coins presented like this could be more prized and valued higher than items that were not given such care and attention to. Is there a number I can call you with questions about my order? When should I leave feedback? Please don't leave any negative feedbacks, as it happens sometimes that people rush to leave feedback before letting sufficient time for their order to arrive.

The matter of fact is that any issues can be resolved, as reputation is most important to me. My goal is to provide superior products and quality of service. How and where do I learn more about collecting ancient coins?

Visit the "Guide on How to Use My Store". For on an overview about using my store, with additional information and links to all other parts of my store which may include educational information on topics you are looking for. This item is in the category "Coins & Paper Money\Coins: Ancient\Roman: Imperial (27 BC-476 AD)". The seller is "highrating_lowprice" and is located in this country: US. This item can be shipped worldwide.