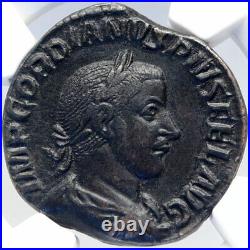 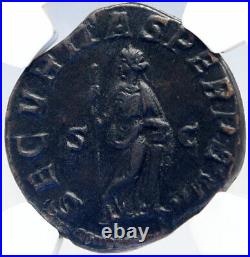 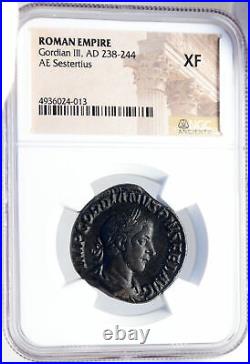 12th emission, struck 243 A. Reference: RIC IV 336; Banti 100; Sear 8740 Certification: NGC Ancients. XF 4936024-013 IMP GORDIANVS PIVS FEL AVG, laureate draped bust right. SECVRITAS PERPETVA S-C, Securitas standing facing, head left, legs crossed, holding scepter and leaning on column. Securitas - Security, as a goddess worshipped by the Romans, is delineated in a great variety of ways on their imperial coins. She appears for the most part under the form of a woman in matronly costume; though in some few instances she is but half clothed, having a veil thrown over the lower extremities. Sometimes she is quietly seated, as if perfectly at her ease and having nothing to fear. That is to say, her right or her left elbow rests on her chair, and the hand supports her head, as in Nero. Or else one of her arms is placed above the head; an attitude which ancient artists regarded as characteristic of repose. She holds in one or other of her hands either a sceptre, or a scipio, or the hasta pura, or a cornucopia, or a patera, or a globe.

On some medals there is near her a lighted altar; on others she stands leaning against, or with her arm upon, a column or cippus, having sometimes the legs crossed in a tranquil, easy posture, carrying one of the above-mentioned symbols, or otherwise holding before her a branch or a crown of olive, or a palm branch. The meaning of these various attitudes and attributes is on the whole too evident to require explanation. There are medals of nearly all the emperors (with flagrant inappropriateness to most of the reigns) from Otho and Vitellius to Constans and Constantius jun. Which have for the type of their reverses this figure of Security, and present for their legend the word SECVRITAS, with the addition of the words, AVGVSTI, or AVGVSTORVM (security of the emperor or of the emperors); ORBIS (security of the world) ; PVBLICA (public security) ; PERPETVA (perpetual security) ; POPVLI ROMANI (security of the Roman people) TEMPORVM (of the Times) ; IMPERII (of the empire) SAECVLI (of the age) ; REPVBLICAE (of the republic), etc. Gordian III (Latin: Marcus Antonius Gordianus Pius Augustus ; 20 January 225 AD - 11 February 244 AD) was Roman Emperor from 238 AD to 244 AD.

Gordian had assumed the name of his maternal grandfather in 238 AD. In 235, following the murder of Emperor Alexander Severus in Moguntiacum (modern Mainz), the capital of the Roman province Germania Superior, Maximinus Thrax was acclaimed Emperor.

In the following years, there was a growing opposition against Maximinus in the Roman senate and amongst the majority of the population of Rome. In 238 a rebellion broke out in the Africa Province, where Gordian's grandfather and uncle, Gordian I and II, were proclaimed joint emperors. This revolt was suppressed within a month by Cappellianus, governor of Numidia and a loyal supporter of Maximinus Thrax.

The elder Gordians died, but public opinion cherished their memory as peace-loving and literate men, victims of Maximinus' oppression. Meanwhile, Maximinus was on the verge of marching on Rome and the Senate elected Pupienus and Balbinus as joint emperors. These senators were not popular men and the population of Rome was still shocked by the elder Gordian's fate, so the Senate decided to take the teenager Gordian, rename him Marcus Antonius Gordianus like his grandfather, and raise him to the rank of Caesar and imperial heir. Pupienus and Balbinus defeated Maximinus, mainly due to the defection of several legions, particularly the II Parthica, who assassinated Maximinus. However, their joint reign was doomed from the start with popular riots, military discontent and an enormous fire that consumed Rome in June 238.

On July 29, Pupienus and Balbinus were killed by the Praetorian Guard and Gordian proclaimed sole emperor. Due to Gordian's age, the imperial government was surrendered to the aristocratic families, who controlled the affairs of Rome through the Senate. In 240, Sabinianus revolted in the African province, but the situation was quickly brought under control.

In 241, Gordian was married to Furia Sabinia Tranquillina, daughter of the newly appointed praetorian prefect, Timesitheus. As chief of the Praetorian Guard and father in law of the Emperor, Timesitheus quickly became the de facto ruler of the Roman Empire. In the 3rd century, the Roman frontiers weakened against the Germanic tribes across the Rhine and Danube, and the Sassanid Empire across the Euphrates increased its own attacks.

When the Persians under Shapur I invaded Mesopotamia, the young emperor opened the doors of the Temple of Janus for the last time in Roman history, and sent a large army to the East. The Sassanids were driven back over the Euphrates and defeated in the Battle of Resaena (243). The campaign was a success and Gordian, who had joined the army, was planning an invasion of the enemy's territory, when his father-in-law died in unclear circumstances.

Without Timesitheus, the campaign, and the Emperor's security, were at risk. Gaius Julius Priscus and, later on, his own brother Marcus Julius Philippus, also known as Philip the Arab, stepped in at this moment as the new Praetorian Prefects and the campaign proceeded. Around February 244, the Persians fought back fiercely to halt the Roman advance to Ctesiphon.

Persian sources claim that a battle occurred (Battle of Misiche) near modern Fallujah (Iraq) and resulted in a major Roman defeat and the death of Gordian III. Roman sources do not mention this battle and suggest that Gordian died far away from Misiche, at Zaitha (Qalat es Salihiyah) in northern Mesopotamia.

Modern scholarship does not unanimously accept this course of the events. One view holds that Gordian died at Zaitha, murdered by his frustrated army, while the role of Philip is unknown. Other scholars, such as Kettenhofen, Hartman and Winter have concluded that Gordian died in battle against the Sassanids. Philip transferred the body of the deceased emperor to Rome and arranged for his dei? Gordian's youth and good nature, along with the deaths of his grandfather and uncle and his own tragic fate at the hands of the enemy, earned him the lasting esteem of the Romans.

The soldiers held Gordian in high esteem, as he had possibly sacrificed his life to save them in 244. World-renowned expert numismatist, enthusiast, author and dealer in authentic ancient Greek, ancient Roman, ancient Byzantine, world coins & more. Ilya Zlobin is an independent individual who has a passion for coin collecting, research and understanding the importance of the historical context and significance all coins and objects represent.

Send me a message about this and I can update your invoice should you want this method. Getting your order to you, quickly and securely is a top priority and is taken seriously here.

Great care is taken in packaging and mailing every item securely and quickly. What is a certificate of authenticity and what guarantees do you give that the item is authentic?

You will be very happy with what you get with the COA; a professional presentation of the coin, with all of the relevant information and a picture of the coin you saw in the listing. Additionally, the coin is inside it's own protective coin flip (holder), with a 2x2 inch description of the coin matching the individual number on the COA.

Whether your goal is to collect or give the item as a gift, coins presented like this could be more prized and valued higher than items that were not given such care and attention to. When should I leave feedback? Please don't leave any negative feedbacks, as it happens sometimes that people rush to leave feedback before letting sufficient time for their order to arrive.

The matter of fact is that any issues can be resolved, as reputation is most important to me. My goal is to provide superior products and quality of service. How and where do I learn more about collecting ancient coins? Visit the Guide on How to Use My Store.

For on an overview about using my store, with additional information and links to all other parts of my store which may include educational information on topics you are looking for. This item is in the category "Coins & Paper Money\Coins: Ancient\Roman: Imperial (27 BC-476 AD)". The seller is "highrating_lowprice" and is located in this country: US. This item can be shipped worldwide.