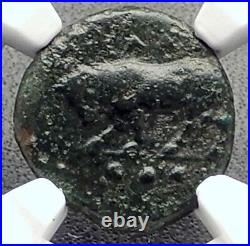 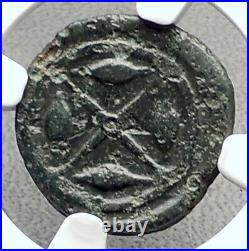 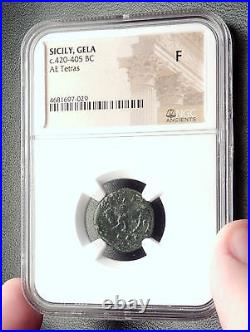 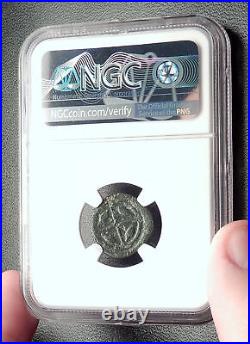 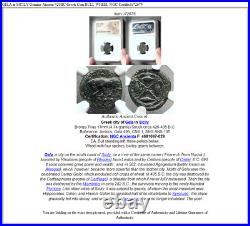 A city on the south coast of Sicily. On a river of the same name (Fiume di Terra Nuova), founded by Rhodians people of Rhodes. From Lindos and by Cretans people of Crete. It soon obtained great power and wealth ; and, in 582, it founded Agrigentum better known as Akragas.

, which, however, became more powerful than the mother city. North of Gela were the celebrated Campi Geloi, which produced rich crops of wheat. The city was destroyed by the Carthaginians people of Carthage. , a disaster from which it never fully recovered.

Then the city was destroyed by the Mamertini. The survivors moving to the newly-founded Phintias. Like other cities of Sicily, it was subject to tyrants, of whom the most important were Hippocrates, Gelon, and Hieron. Gelon transported half of its inhabitants to Syracuse.

The place gradually fell into decay, and in the time of Augustus. It was no longer inhabited. The poet Aeschylus died here. The city Gela in Sicily was founded around 688 BC by colonists from Rhodos (Rhodes) and Crete, 45 years after the founding of Syracuse.

The city was named after the river Gela. The Greeks had many colonies in the south of what is now Italy, and for many centuries the Greeks had a major influence on the area. Gela flourished and, after only a century, a group of Geloi founded the colony of Agrigento. The expansion, however, led to economic and social strains, which led the plebs to leave the city and settle in nearby Maktorion.

For over a century no further mention is made about the internal politics of the city, until the ancient historians note that a tyrant, Cleander, ruled Gela between 505 BC and 498 BC. After his death, power transferred to his brother Hippocrates, who conquered Callipoli, Leontini, Naxos, Hergetios and Zancles, the current Messina.

Only Syracuse, with the help of her former colonizing city, Corinth and Corcyra, managed to escape the Gelese expansion. When Camarina, a Syracusan colony, rebelled in 492 BC, Hippocrates intervened to wage war against Syracuse. After having defeated the Syracusan army at the Heloros river, he besieged the city. The tyrant lost his life in 491 in a battle against the Siculi, the native Sicilian people. Hippocrates was succeeded by Gelo, who, in 484, conquered Syracuse and moved his seat of government there.

His brother Hiero was given control over Gela. When Theron of Agrigento conquered Himera and a Carthaginian army disembarked in Sicily to counter him, he asked for help from Gela and Syracuse. Gelo and Hiero were victorious in the subsequent battle of Himera, in which the Carthaginian leader Hamilcar lost his life. After the death of Gelo (478 BC), Hiero moved to Syracuse, leaving Gela to Polyzelos. Thenceforth the history of the city becomes uncertain: it has been suggested that the citizens freed themselves from the rule of tyrants and established a democratic government.

Gela was at the head of the Sicilian league that pushed back the Athenian attempt to conquer the island in 424 (see Sicilian Expedition). In 406 the Carthaginians conquered Agrigento and destroyed it. Gela asked for the help of Dionysius I of Syracuse.

However, for unknown reasons, the latter did not arrive in time and, after heroic deeds, Gela was turned into ruins and its treasures sacked (405). The survivors took refuge in Syracuse. Under Agathocles (317-289 BC) the city suffered again for internal strife between the general population and the aristocrats.

When the Carthaginians arrived in 311 BC, they met little resistance and captured the city with the help of the aristoi. In 282 BC Phintias of Agrigento, who had founded a city next to the modern Licata, destroyed ruthlessly Gela to crush forever its power.

World-renowned expert numismatist, enthusiast, author and dealer in authentic ancient Greek, ancient Roman, ancient Byzantine, world coins & more. Ilya Zlobin is an independent individual who has a passion for coin collecting, research and understanding the importance of the historical context and significance all coins and objects represent. Send me a message about this and I can update your invoice should you want this method.

Getting your order to you, quickly and securely is a top priority and is taken seriously here. Great care is taken in packaging and mailing every item securely and quickly. What is a certificate of authenticity and what guarantees do you give that the item is authentic? You will be very happy with what you get with the COA; a professional presentation of the coin, with all of the relevant information and a picture of the coin you saw in the listing. Additionally, the coin is inside it's own protective coin flip (holder), with a 2x2 inch description of the coin matching the individual number on the COA. Whether your goal is to collect or give the item as a gift, coins presented like this could be more prized and valued higher than items that were not given such care and attention to. When should I leave feedback? Please don't leave any negative feedbacks, as it happens sometimes that people rush to leave feedback before letting sufficient time for their order to arrive.

The matter of fact is that any issues can be resolved, as reputation is most important to me. My goal is to provide superior products and quality of service. How and where do I learn more about collecting ancient coins?

Visit the Guide on How to Use My Store. For on an overview about using my store, with additional information and links to all other parts of my store which may include educational information on topics you are looking for.

This item is in the category "Coins & Paper Money\Coins: Ancient\Greek (450 BC-100 AD)". The seller is "highrating_lowprice" and is located in this country: US. This item can be shipped worldwide.