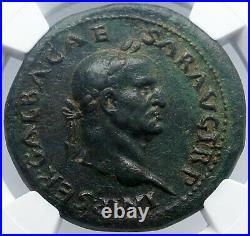 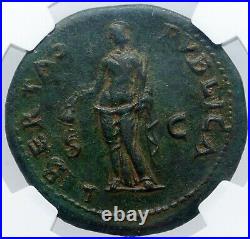 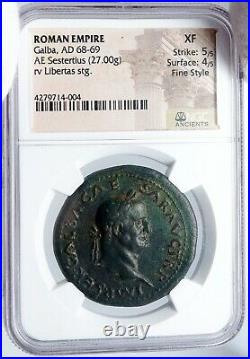 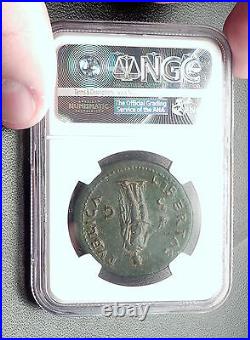 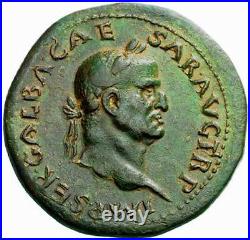 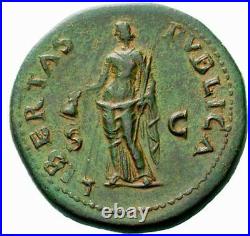 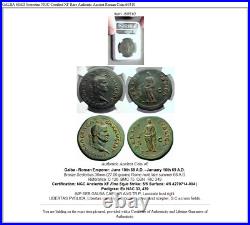 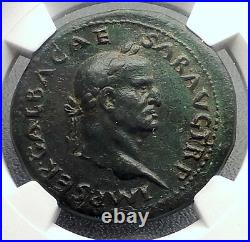 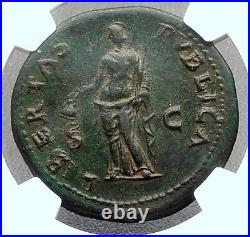 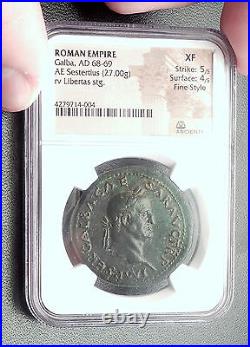 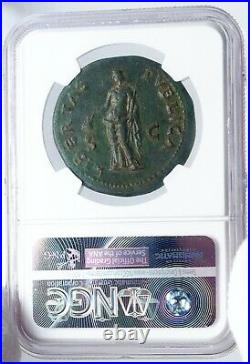 Was Roman Emperor for seven months from 68 to 69. He was the first emperor of the Year of the Four Emperors and the last emperor born in the First Century BC.

He was born as Servius Sulpicius Galba near Terracina, "on the left as you go towards Fundi " in the words of Suetonius. Through his paternal grandfather ("more eminent for his learning than for his rank - for he did not advance beyond the grade of praetor" and who "published a voluminous and painstaking history", and, according to Suetonius, predicted his rise to power), he was descended from Servius Sulpicius Galba.

Galba's father attained the consulship, and although he was short, hunchbacked and only an indifferent speaker, was an industrious pleader at the bar. His mother was Mummia Achaica, the granddaughter of Lutatius Catulus cos. 78 and great-granddaughter of Lucius Mummius Achaicus. They only had one other child, an elder son called Gaius who left Rome after squandering the greater part of his estate, and committed suicide because Tiberius dishonored him by preventing him from taking part in the allotment of the provinces in his year.

His father married a second wife, Livia Ocellina, a distant kinswoman of the empress Livia. She later adopted Galba, so he took her names, remaining Lucius Livius Ocella Sulpicius Galba until becoming emperor. His was a noble family, and he was a man of great wealth, but was unconnected by birth and only very, very remotely by adoption with any of the first six Caesars. In his early years he was regarded as a youth of remarkable abilities, and it is said that both Augustus and Tiberius prophesied his future eminence Tacitus, Annals , vi.

Galba 4 ; Dio 57.19.4. His wife, Aemilia Lepida, however, was connected by the marriages of some of her relatives to some of the Julii-Claudii. They had two sons, probably Gaius and Servius (most likely Livius Ocella Galba), who died during their father's life. The elder son was born circa 25 AD. Hardly anything is known about his life as he died young. He was engaged to his step-sister Antonia Postuma, but they never wed, which leads modern historians to believe that he died during this time. Their engagement is dated to 48, and that is generally believed to be his time of death.

The date of birth of the younger son occurred later than 25 but before 30. This Galba outlived his older brother. He was a quaestor in 58, but he was never seen in politics after that. His time of death is generally believed to be around 60 AD. Galba Minor was never married and had no children.

In addition, Suetonius's description of Galba was that "In sexual matters he was more inclined to males, and then none but the hard bodied and those past their prime". This seems to be the only case in Roman history where a named individual male is stated to prefer adult males. He became Praetor in 20, and consul in 33; he earned a reputation in the provinces of Gaul, Germania, Africa and Hispania for his military capability, strictness and impartiality.

For the first half of Nero's reign he lived in retirement, until 61, when the emperor bestowed on him the province of Hispania Tarraconensis. In the spring of 68, Galba was informed of Nero's intention to put him to death, and of the insurrection of Julius Vindex in Gaul.

He was at first inclined to follow the example of Vindex, but the defeat at Vesontio (Besançon) and suicide of the latter renewed Galba's hesitation. It was said that the courtier Calvia Crispinilla was behind his defection from Nero. The news that Nymphidius Sabinus, the Praetorian Prefect, had given him his favour revived Galba's spirits.

Until now, he had only dared to call himself the legate of the senate and Roman people; after Nero's suicide, he assumed the title of Caesar , and marched straight for Rome. Following Nero's death, Nymphidius Sabinus sought to seize power prior to the arrival of Galba, but he could not win the loyalty of the Praetorian guard and was killed. Upon Galba's approach to the city in October, he was met by soldiers presenting demands; Galba replied by killing many of them. Galba's primary concern during his brief reign was restoring state finances, and to this end he undertook a number of unpopular measures, the most dangerous was his refusal to pay the praetorians the reward promised in his name.

Galba scorned the notion that soldiers should be " bribed " for their loyalty. He also sentenced many to death without trial, and rarely accepted requests for citizenship.

He further disgusted the populace by his meanness and dislike of pomp and display. Advanced age destroyed his energy, and he was entirely in the hands of favourites. Three of these - Titus Vinius, who became Galba's colleague as consul, Cornelius Laco, the commander of the Praetorian Guard, and Galba's freedman Icelus Marcianus - were said to virtually control the emperor. The three were called "The Three Pedagogues " because of their influence on Galba. All this made the new emperor gravely unpopular. During the later period of his provincial administration, Galba was indolent and apathetic, but this was due either to a desire not to attract Nero's notice or to the growing infirmities of age. Tacitus says all pronounced him worthy of the empire, until he became emperor (" omnium consensu capax imperii nisi imperasset ").

Military mutiny on the frontier. On 1 January 69, two legions in Germania Superior refused to swear loyalty to Galba. They toppled his statues, demanding that a new emperor be chosen. On the following day, the soldiers of Germania Inferior also rebelled and took the decision of who should be the next emperor into their own hands, proclaiming the governor of the province, Vitellius, as Emperor. This outbreak of revolt made Galba aware of his own unpopularity and of the general discontent.

In order to check the rising storm, he adopted as his heir and successor L. The populace regarded the choice of successor as a sign of fear and the Praetorians were indignant, because the usual donative was not forthcoming. Salvius Otho, who was expecting to be adopted, was alienated by the choice of Piso.

While Otho had governed Lusitania and was one of Galba's earliest supporters, he was disappointed at the selection of Piso and entered into communication with the discontented Praetorians, who hailed him as their emperor on 15 January 69. Galba at once set out to meet the rebels, though he was so feeble that he had to be carried in a litter. According to Suetonius, Galba prior to his death had put on a linen corset-although remarking that it had little protection against so many swords. He was met by a troop of Otho's cavalry and was killed near Lacus Curtius. One guard, centurion Sempronius Densus, died defending him.

Piso was killed shortly afterwards. According to Plutarch, during Galba's last moments he offered his neck, and said, Strike, if it be for the good of the Romans! After his death, Galba's head was brought to Otho, who gave it to his camp followers who paraded and mocked it-the camp followers' mocking was their angry response to a remark by Galba that his strength was unimpaired. The head was then bought by a freedman so he could throw it on the place where his former master had been executed on Galba's orders.

Ilya Zlobin is an independent individual who has a passion for coin collecting, research and understanding the importance of the historical context and significance all coins and objects represent. Send me a message about this and I can update your invoice should you want this method. Getting your order to you, quickly and securely is a top priority and is taken seriously here. Great care is taken in packaging and mailing every item securely and quickly.

What is a certificate of authenticity and what guarantees do you give that the item is authentic? You will be very happy with what you get with the COA; a professional presentation of the coin, with all of the relevant information and a picture of the coin you saw in the listing. Additionally, the coin is inside it's own protective coin flip (holder), with a 2x2 inch description of the coin matching the individual number on the COA.

Whether your goal is to collect or give the item as a gift, coins presented like this could be more prized and valued higher than items that were not given such care and attention to. Is there a number I can call you with questions about my order? When should I leave feedback? Please don't leave any negative feedbacks, as it happens sometimes that people rush to leave feedback before letting sufficient time for their order to arrive. The matter of fact is that any issues can be resolved, as reputation is most important to me.

My goal is to provide superior products and quality of service. How and where do I learn more about collecting ancient coins?

Visit the "Guide on How to Use My Store" for on an overview about using my store, with additional information and links to all other parts of my store which may include educational information on topics you are looking for. You may also want to do a YouTube search for the term "ancient coin collecting" for educational videos on this topic. This item is in the category "Coins & Paper Money\Coins: Ancient\Roman: Imperial (27 BC-476 AD)". The seller is "highrating_lowprice" and is located in this country: US. This item can be shipped worldwide.