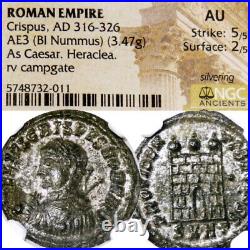 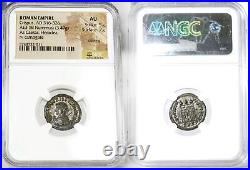 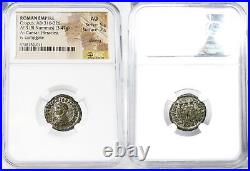 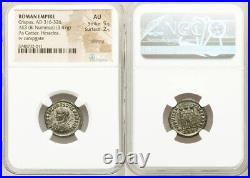 RARE Ancient Roman Coinage of Crispus Constantine the Great. 317-326 AD Son of and under.

Æ3 Follis (billon nummis) 19mm. RARE Rated R1 in RIC. Crispus was executed by his father Constantine for incest with his step-mother, Constantine's wife Fausta. Constantine executed his son (by his first wife/consort Minervina) Crispus on trumped-up charges of incest and boiled his own wife--scalded in the bath on the order of Constantine in 326. Under Crispus as Caesar, and Constantine "the Great" as Emperor. Obverse: D N FL IVL CRISPVS NOB CAES, laureate bust of Crispus left in imperial mantle, seen from front, globe and scepter in left hand, mappa in right. Reverse: PROVIDEN-TIAE AVGG, campgate with three turrets, no doors, six stone layers. Pellet in right field, SMHG below. NGC Graded & Certified AU About Uncirculated--Silvering 5/5 2/5 Gorgeous Coin with much original Silvering! RARE Rated "R1" in RIC ratings range from Common-("C") Scarce ("S") - to Rare ("R") with a numerical score 1 to 5. RIC (Roman Imperial Coinage) is the general abbreviation for the set of 13 volumes of identification catalogs of Roman coins.

RIC is the definitive / world standard scholarly reference. OUR GUARANTEE: All illustrations are of the actual item offered. The authenticity of all pieces is fully guaranteed. This item is in the category "Coins & Paper Money\Coins: Ancient\Roman: Imperial (27 BC-476 AD)".

The seller is "zeus_gallery" and is located in this country: US. This item can be shipped worldwide.