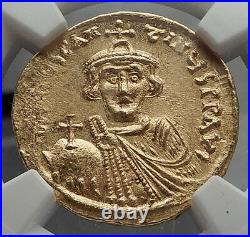 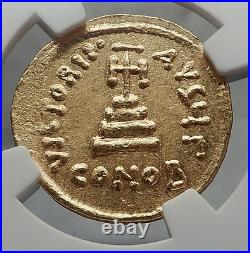 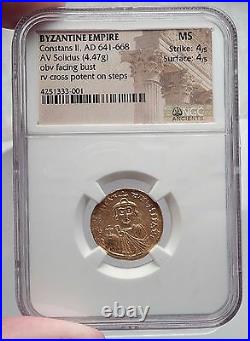 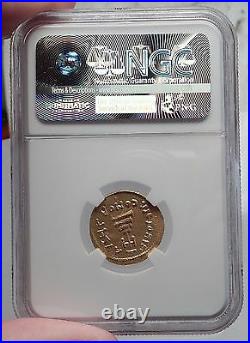 Was Byzantine emperor from 641 to 668. He also was the last emperor to become consul in 642, becoming the last Roman consul in history. Constans is a diminutive nickname given to the emperor, who had been baptized Herakleios and reigned officially as Constantine. The nickname established itself in Byzantine texts, and has become standard in modern historiography. Constans was the son of Constantine III and Gregoria.

Due to the rumours that Heraklonas and Martina had poisoned Constantine III he was named co-emperor in 641. Later that same year his uncle was deposed and Constans II was left as sole emperor. Constans owed his throne to a popular reaction against his uncle and to the protection of the soldiers led by the general Valentinus. Although the precocious emperor addressed the senate with a speech blaming Heraklonas and Martina for eliminating his father, he reigned under a regency of senators led by Patriarch Paul II of Constantinople. In 644 Valentinus attempted to seize power for himself but failed.

Under Constans, the Byzantines completely withdrew from Egypt in 642, and Caliph Uthman launched numerous attacks on the islands of the Mediterranean Sea and Aegean Sea. A Byzantine fleet under the admiral Manuel occupied Alexandria again in 645, but after a Muslim victory the following year this had to be abandoned. The situation was complicated by the violent opposition to Monothelitism by the clergy in the west, and the related rebellion of the Exarch of Carthage, Gregory. The latter fell in battle against the army of Caliph Uthman and the region remained a vassal state under Caliphate, until the civil war broke out and the imperial rule was again restored. Constans attempted to steer a middle line in the church dispute between Orthodoxy and Monothelitism, by refusing to persecute either and prohibiting further discussion of the natures of Jesus Christ by decree in 648.

Naturally, this live-and-let-live compromise satisfied few passionate participants in the dispute. Meanwhile, the Caliphate advance continued unabated. In 647 they had entered into Armenia and Cappadocia, and sacked Caesarea Mazaca. In 648 the Arabs raided into Phrygia and in 649 launched their first maritime expedition against Crete. A major Arab offensive into Cilicia and Isauria in 650-651 forced the emperor to enter into negotiations with Caliph Uthman's governor of Syria, Muawiyah. The truce that followed allowed a short respite, and made it possible for Constans to hold on to the western portions of Armenia. In 654, however, Muawiyah renewed his raids by sea, and plundered Rhodes. Before the battle, chronicler Theophanes the Confessor says, the emperor dreamt to be at Thessalonika, this dream predicted his defeat against the Arabs because the word Thessalonika is similar to the sentence "thes allo niken", that means "gave victory to another (the enemy)". Caliph Uthman was preparing to attack Constantinople, but did not carry out the plan when civil war between the future Sunni and Shi'a factions broke out among them in 656. With the eastern frontier under less pressure, in 658 Constans defeated the Slavs in the Balkans, temporarily reasserting some notion of Byzantine rule over them.

In 659 he campaigned far to the east, taking advantage of a rebellion against the Caliphate in Media. The same year he concluded peace with the Arabs. Now Constans could turn to church matters once again. Pope Martin I had condemned both Monothelitism and Constans' attempt to halt debates over it (the Type of Constans) in the Lateran Council of 649. Now the emperor ordered his Exarch of Ravenna to arrest the Pope.

One Exarch excused himself from this task, but his successor carried it out in 653. The Pope was brought to Constantinople and condemned as a criminal, ultimately being exiled to Cherson, where he died in 655. Constans grew increasingly fearful that his younger brother, Theodosius, could oust him from the throne: he therefore obliged him first to take holy orders, and later had Theodosius killed in 660. Constans' sons Constantine, Heraclius, and Tiberius had been associated on the throne since the 650s.

However, having attracted the hatred of citizens of Constantinople, Constans decided to leave the capital and to move to Syracuse in Sicily. From here, in 661, he launched an assault against the Lombard Duchy of Benevento, which then occupied most of Southern Italy. Taking advantage of the fact that Lombard king Grimoald I of Benevento was engaged against Frankish forces from Neustria, Constans II disembarked at Taranto and besieged Lucera and Benevento.

However, the latter resisted and Constans withdrew to Naples. During the travel from Benevento to Naples, Constans II was defeated by Mitolas, Count of Capua, near Pugna. Constans ordered Saburrus, the commander of his army, to attack again the Lombards but he was defeated by the Beneventani at Forino, between Avellino and Salerno. In 663 Constans visited Rome for 12 days-no emperor having set foot in Rome for two centuries-and was received with great honor by Pope Vitalian (657-672). Although on friendly terms with Vitalian, he stripped buildings, including the Pantheon, of their ornaments and bronze to be carried back to Constantinople, and declared the Pope of Rome to have no jurisdiction over the Archbishop of Ravenna, since that city was the seat of the exarch, his immediate representative. His subsequent moves in Calabria and Sardinia were marked by further strippings and request of tributes that enraged his Italian subjects. Rumours that he was going to move the capital of the empire to Syracuse were probably fatal for Constans. He was assassinated in his bath by his chamberlain. His son Constantine succeeded him as Constantine IV, a brief usurpation in Sicily by Mezezius being quickly suppressed by the new emperor. By his wife Fausta, a daughter of the patrician Valentinus, Constans II had three sons.

Ilya Zlobin, world-renowned expert numismatist, enthusiast, author and dealer in authentic ancient Greek, ancient Roman, ancient Byzantine, world coins & more. Ilya Zlobin is an independent individual who has a passion for coin collecting, research and understanding the importance of the historical context and significance all coins and objects represent.

Send me a message about this and I can update your invoice should you want this method. Getting your order to you, quickly and securely is a top priority and is taken seriously here. Great care is taken in packaging and mailing every item securely and quickly. What is a certificate of authenticity and what guarantees do you give that the item is authentic?

You will be very happy with what you get with the COA; a professional presentation of the coin, with all of the relevant information and a picture of the coin you saw in the listing. Additionally, the coin is inside it's own protective coin flip (holder), with a 2x2 inch description of the coin matching the individual number on the COA. Whether your goal is to collect or give the item as a gift, coins presented like this could be more prized and valued higher than items that were not given such care and attention to. Is there a number I can call you with questions about my order? When should I leave feedback?

Please don't leave any negative feedbacks, as it happens sometimes that people rush to leave feedback before letting sufficient time for their order to arrive. The matter of fact is that any issues can be resolved, as reputation is most important to me. My goal is to provide superior products and quality of service.

How and where do I learn more about collecting ancient coins? Visit the "Guide on How to Use My Store" for on an overview about using my store, with additional information and links to all other parts of my store which may include educational information on topics you are looking for. You may also want to do a YouTube search for the term "ancient coin collecting" for educational videos on this topic. This item is in the category "Coins & Paper Money\Coins: Ancient\Byzantine (300-1400 AD)".

The seller is "highrating_lowprice" and is located in this country: US. This item can be shipped worldwide.